California tailback Jahvid Best was removed from the field after he leapt at least 5 feet high into the air and fell into the end zone during the first half of an NCAA college football game last Saturday, Nov. 7, 2009, in Berkeley, California.   After the terrifying fall (he landed on the back of his head), Best briefly lost consciousness and was taken on a gurney to an emergency room for observation and examination. 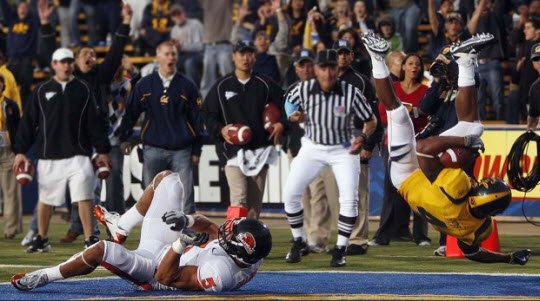 Best had movement in all of his extremities, Cal spokesman Herb Benenson said. Benenson also said that a preliminary evaluation showed Best sustained a concussion, but more tests were being done before a final diagnosis would be announced by the school. Cal head coach Jeff  Tedford didn’t know whether Best would be kept in the hospital over night.

Here’s the video of the fall…

The game was delayed 13 minutes.  Before play resumed, Tedford told his players Best was moving and assured them he would be OK.  (via fanhouse)