Recently dubbed “Sexiest Man Alive” by People magazine, Ryan Reynolds suits up as the comic-book hero Green Lantern next year where he’ll be flaunting his superhero pecs.  Green Lantern derives his  powers (and his green color) from an extraterrestrial source —  an alien whose spaceship crashed on Earth.  The movie will be released in 2D and 3D next summer.  It also stars Blake Lively and Peter Sarsgaard. 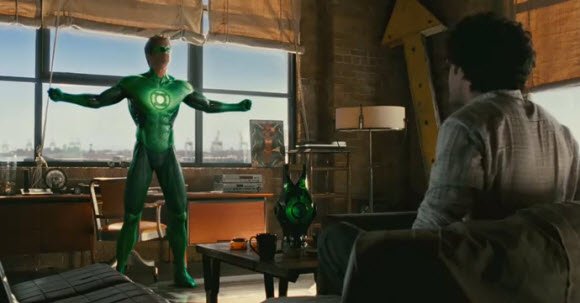 Speaking of 3D, Warner Brothers announced that part 1 of “Harry Potter and the Deathly Hallows”, which hits theaters on November 19, will only be in boring 2D, instead of everyone-loves-it 3D.

Here is the press release:

Warner Bros Pictures has made the decision to release “Harry Potter and the Deathly Hallows – Part 1” in 2D, in both conventional and IMAX theaters, as we will not have a completed 3D version of the film within our release date window. Despite everyone’s best efforts, we were unable to convert the film in its entirety and meet the highest standards of quality. We do not want to disappoint fans who have long-anticipated the conclusion of this extraordinary journey, and to that end, we are releasing our film day-and-date on November 19, 2010 as planned. We, in alignment with our filmmakers, believe this is the best course to take in order to ensure that our audiences enjoy the consummate “Harry Potter” experience.

To all fans of Harry Potter, sorry, no 3D for you.  But you do get a Green Lantern trailer!