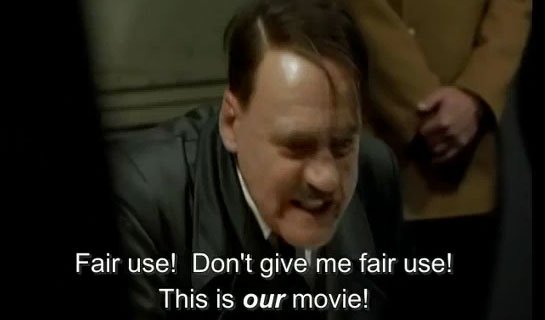 When the studio Constantin Films ordered a DMCA takedown of every  “Hitler rants…” clips on the web which feature a short clip from the movie Der Untergang (Downfall), most of these downfall clips were taken down.  The takedown also caught one amusing video: it’s a parody of the takedown itself which uses the same downfall clip.  A must-see.

Brad Templeton, the producer of this DMCA takedown parody, filed a dispute after the video has been taken down though the YouTube Content-ID takedown system and so it’s back up again.  Here it is.

Brad Templeton is the EFF chairman but releases this video on his own.  The video educates about intellectual property issues and parodies the actions of the studio using the very clip they are trying to block.

Downfall (German: Der Untergang) is a 2004 German-Austrian epic drama film directed by Oliver Hirschbiegel, depicting the final ten days of Adolf Hitler’s life in his Berlin bunker and Nazi Germany in 1945.  The film is distributed by Constantin Films. (src: wiki)

If not for these parodies, if not for these million views(!), very few people would have ever heard of this movie.  Constantin Films should be thanking the producers of these parodies instead of sending DMCA takedown notices.  These funny clips just helped pulled the 2004 movie out of oblivion.