The massive Coachella music festival is webcasting live all weekend (April 15th to April 17th) on Youtube. The webcast is currently showing 3 channels on youtube.com/coachella. 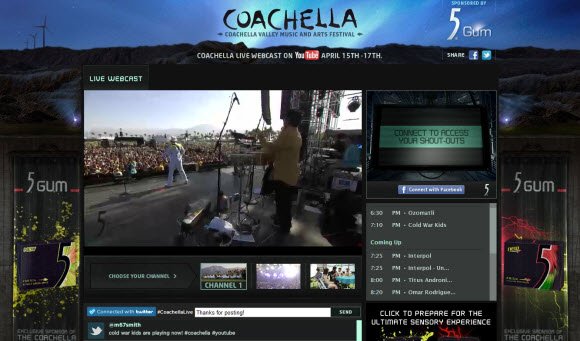 The Coachella Valley Music and Arts Festival (commonly known as Coachella or Coachella Festival) is a three-day (formerly a one or two-day) annual music and arts festival, organized by Goldenvoice (a subsidiary of AEG Live) and held at the Empire Polo Fields in Indio, California, in the Inland Empire’s Coachella Valley. The event features many genres of music including alternative rock, indie, and electronic music as well as large sculptural art. The event has several stages/tents set-up throughout the grounds, each playing live music continuously.

The Coachella Music Festival has a desert setting (the city of Indio is a part of the California Desert), with daytime temperatures frequently rising to over 100 °F (38 °C). The festival enjoys little cloud cover or shade. The temperature drops drastically after sunset. (source:wikipedia.com & youtube.com)