Oh endorsements how we love you. For every George Foreman Grill – something that was supposedly intended for Hulk Hogan – you get ten duds. The most comical examples of endorsements gone wrong are when sport stars attach their name to video games. We haven’t seen too many bad ones in recent years, but if you comb through the back catalog of gaming history you discover some truly atrocious games with sporting heroes and their names attached to it. Below are a few select picks.

Pint-size jockey Frankie Dettori is hugely popular in Britain thanks in no small part to his winning ways on the racetrack. However, despite his talent he couldn’t save this game from stopping in the stalls. Of the games we will be mentioning this is by far the best. Graphics and gameplay let it down, while the fact that there are only flat courses also diminishes the game. To put the general verdict surrounding this game into it’s sporting context, if this game was a horse it would be priced at 500/1 in the Grand National odds, it is a no-hoper. 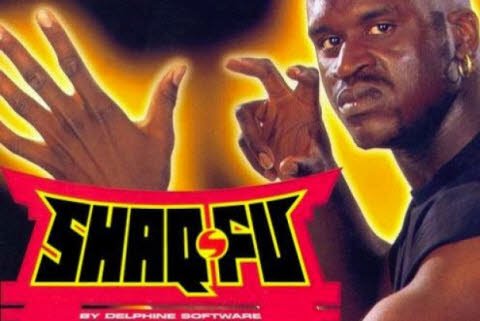 While he may have his critics one cannot deny that Shaquille O’Neal was one heck of a basketball player; game developer he is not.

If you were to ask anyone who has ever had the displeasure of playing this game they would tell just how inherently awful it is. For starters, the storyline is just whack. En route to Tokyo, where Shaq is playing in a charity match, the former LA Lakers star pops into a dojo where he is told to save a young boy from a mummy in an alternative dimension. That’s more farcical than the picture of Shaq and the seal.

In keeping with the terrible plot are the awkward and unresponsive controls. There is even commentary provided, unfortunately Andy Townsend is better.

Rumours are rumbling that O’Neal wants to try and bring out a sequel.

It is never nice bashing Tony Hawk as he is one of the coolest and nicest people involved in the world of sport. The video games he endorsed in the late 1990s and early 2000s were absolutely fantastic and can be classed as game-changing.

Sadly Hawk and Activision pushed it too far with Tony Hawk Ride. Instead of using your controller you would ride on a skateboard, much like using a steering wheel in a racing game. The idea may have been novel but the practicality of this game soon came into question. How are people supposed to try and do 360° board-spins in their front room?

As much as Hawk wants to get people boarding he should have had the hindsight to see that it was a game that was barely feasible in logic.

Lionel Messi, the current Fifa cover star, is the modern day Pele. Both are considered as two of the greatest footballers of all time and there is a large consensus of people who believe Messi will overtake Pele and become the greatest ever.

Messi is already ahead of Pele in terms of video games. Thanks to the mercurial talent of EA Sports’ game developers Messi is fronting the most realistic and well-received soccer game in history. Pele, by contrast, endorsed a game where players were represented as squares, who would move simultaneously in triangles of three.

Granted it is an old game, but come on. Take one look at the gameplay and ask yourself who could ever enjoy playing that as a child?