Nope.  It’s not from Sony, but from the Japanese auto giant Toyota.  Toyota has recently unveiled  this massive ‘playstation’ to the public, but this giant gadget is no toy.  It’s a driving simulator.  It is designed to analyze driving characteristics under conditions such as falling asleep at the wheel and drowsiness, fatigue or illness, as well as developing active safety technology for effectively reducing the number of accidents. 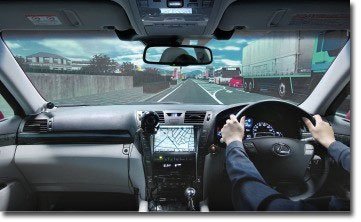 This massive driving simulator,  located at Toyota’s Higashifuji Technical Centre in Japan, uses a real car placed on a platform housed inside a 7.1-metre-diameter dome, the inside of which serves as a giant 360-degree video screen.   This virtual reality dome, which tilts, vibrates, and can be moved around an area the equivalent of four tennis courts, provides one of the world’s most-realistic simulated driving environments allowing driving habits and reactions to be accurately gauged.  The designers say the simulator gives the same sensations of driving, including a sense of speed, acceleration and riding comfort through turns and other driving maneuvers.  Plus, the simulator’s sound effects make the experience even more real.  (It’s the world’s biggest playstation.  The engineers have the latest version of Gran Turismo plugged into it, haven’t they?…) 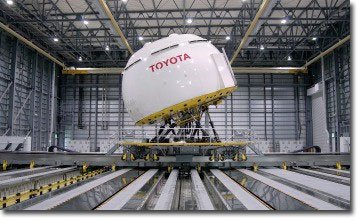 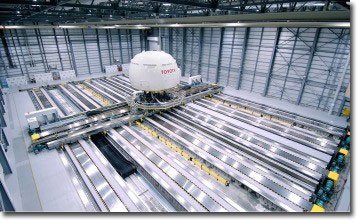 With the plan to put the driving simulator to full use, Toyota is aiming to produce cars that never crash by developing more advance safety systems that support safe driving practices and integrate cars with the road infrastructure. (I hope this includes cars with built-in breath alcohol testers. That’s right.  Cars that can smell alcohol and would auto-pilot to the nearest precint.)