e-Learning or Electronic Learning is a general term used to refer to computer-enhanced learning. It is basically a computer-based training method. It has been made highly interactive in the last few years with the use of CD’s, LCD’s, multi-media, online chatting and even web cam interaction. Instructors may be separated from his class of students physically, the interaction between them is no less intense. 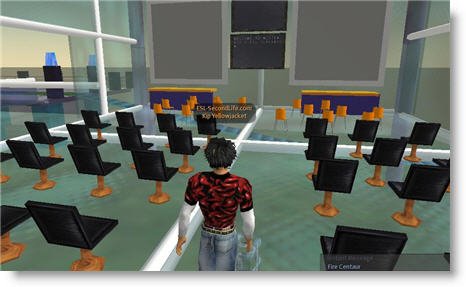 Second Life has recently become one of the cutting-edge virtual classrooms for major colleges and universities in the US and in UK. Last year, instructors started using Second Life for teaching lessons to students. Educators have begun to use the virtual world as a classroom.

Second Life is an internet-based virtual world launched in 2003, developed by Linden Research, Inc which came to international attention via mainstream news media in late 2006 and early 2007. A downloadable client program called the Second Life Viewer enables its users, called “Residents”, to interact with each other through motional avatars in a user-defined world in which people can interact, play, do business, and otherwise communicate, providing an advanced level of a social network service . Residents can explore, meet other Residents, socialize, participate in individual and group activities, create and trade items (virtual property) and services from one another. Aside from Second Life, other notable virtual worlds include Kaneva, There, and Active Worlds. With the advent of such technology, computer learning or e-learning is now being taken to a higher level. Soon, you may find your motion avatar attending a PMP training, or that much needed excel training course for your personal accounting — in a virtual classroom.

1 thought on “3D Virtual Worlds: The future of E-Learning?”