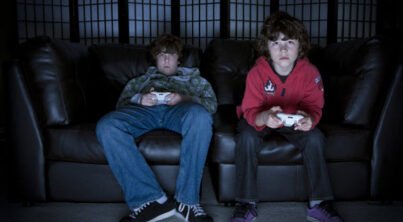 Most of us know Felicia Day from her web series The Guild and the Geek and Sundry Network on YouTube. Over the summer Ms Day released a memoir called You’re Never Weird on the Internet and in it she talks about the life of The Guild, how she formed Geek and Sundry, what it was …

Can You Really Become Addicted to Video Games? Read More »

Cyrax and Sektor are chosen by the Grand Master to become the ultimate fighting machines of the Lin Kuei clan. They are subjected to a cybernetic transformation that will erase their memories and a series of tests. [Click here to watch Episode 8] Episode 9: “Cyrax and Sektor” Mortal Kombat Legacy Episode 9 [Click here …

After Hanzo Hasashi has failed to protect his village from the hands of the wicked Sub-Zero and the Lin Kuei, he is visited by a mysterious sorcerer. Will vengeance be enough to get Scorpion to enter the Mortal Kombat Tournament? [Click here to watch Episode 7] Episode 8: “Scorpion and Sub Zero” (Part 2) Mortal …

Hanzo Hasashi, the fearless General of the Shirai Ryu clan, encounters his mortal enemy, Sub Zero, while traveling to meet with the Shogun of Kumamoto Castle. He finds himself in a trap that has led him away from his family, leaving them defenseless. Now he must defeat Sub Zero and return to his village before …

Before you play the video below, please note that it could spoil the ending of Portal 2 for you as it contains the actual song that plays at the end of the game and the ending cinematic. The ending track was composed by none other than singer-songwriter and self-described geek Jonathan Coulton and sung by …

Lord Raiden is stuck in an earthly mental institution and he must escape before time runs out. Episode 6, “Raiden”, is the best episode so far. Plus, they finally got rid of the “previously on…” on this episode. Thumbs up to director Kevin Tancharoen. Click here to watch Episode 5. Episode 6: “Raiden” Synopsis The …

Despite Mileena’s growing resentment towards Kitana, Shao Kahn uses them to destroy all who threaten his rule. But when they come upon King Jerrod on one of their missions, they finally learn the truth about their Mother and Father, and Kitana looks to plot her revenge against Shao Kahn.

Beautiful, athletic, and trained as highly skilled assassins, Kitana and Mileena have grown up thinking that they are sisters. Shao Kahn, Emperor of the Outworld, has tricked Shang Tsung into becoming his servant for Mortal Kombat by making him clone Mileena as a Tarkatan clone of Kitana, out of Shao Kahn’s fear that Kitana wouldn’t love him enough if she ever found out the truth about her Mother and Father.

Portal 2 is the sequel to one of the most anticipated games in the world -the 2007 video game Portal. Portal 2 is a first-person puzzle-platform video game. It was initially slated for release in the last quarter of 2010 but was postponed to the 3rd week of April 2011. Watch the Portal 2 Trailer …