Apparently, the answer is yes. The company has filed for a patent that they say is a stylus with improved functionality. According to the US Patent & Trademark Office, they have filed a patent for the “Active Stylus” which is basically your ordinary stylus, just with an electrode fitted at the tip. While not aiming to revolutionize the stylus, Apple only aims to improve its accuracy while keeping the price low.

Here is Apple’s summary of the stylus, found in their patent application:

While the patent application did not make any mention of Apple, the website Patently Apple, learned that the men filing for it are both engineering managers there. As stated in the patent application, the ones who filed are Jonah Harley and David Simon, and their positions at Apple can be confirmed through their LinkedIn profiles. Turns out, Apple allows their engineers to be listed as the inventors so outsiders are not aware of any new things that are being developed.

Another part of the patent application states that: 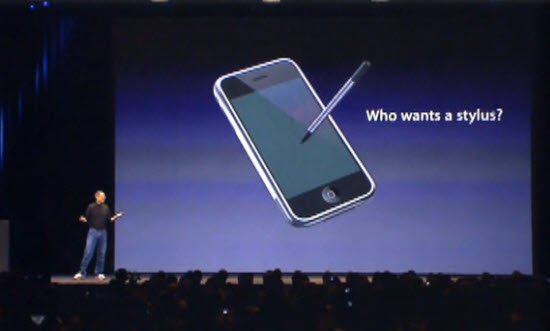 It seems that Apple has been working in a stylus for years now but their work has never surfaced most likely under the leadership of Steve Jobs. Now that Tim Cook is at the help, they are more likely to come out with their improved stylus since Jobs was known to ridicule the stylus while he was Apple’s CEO. In Jobs’ eyes, a device that came with a stylus was a failure. In an event in 2010, he was even quoted as saying “If you see a stylus, they blew it.”

About the author: Henry Conrad is a 29-year-old game developer from Albuquerque, New Mexico. Aside from gaming and being a tech junky, he also dabbles in creative writing, which allows him to create great storylines and backgrounds for his characters. Follow me on Twitter and join me in Google +